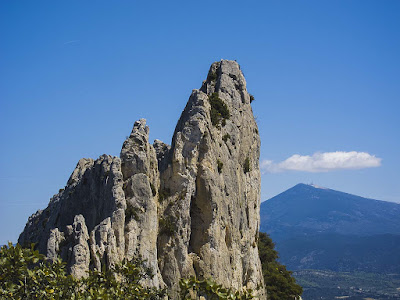 This is a walk along the highest part of the Dentelles (Dentelles Sarrasines). It gives you a real touch-on feeling for the place and has fantastic views in all directions. Given the fact that we follow the trail along its high ridge, it will be steep parts that in places could be difficult for some because of the sheer steepness, slippery stones or simply because of vertigo. 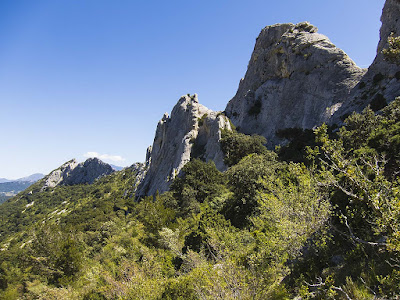 From Pertuis, I was surprised to discover that the “country route” by car to Gigondas was quicker than using the motorway to Orange Sud, as I usually have taken. (From Cavaillon, follow at first for Carpentras, but at Velleron go straight on for Monteaux, Sarrians and Vacqueyras.) When approaching Gigondas village, take left in the round, signposted for Dentelles de Mintmireil. Drive all the way up to Col du Cayron and park here. 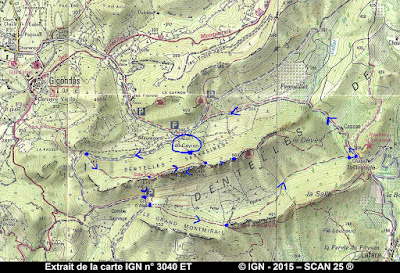 You start walking along the forest road going uphill in a general westerly direction. After about 20 minutes, you are on the next Col along this road, and here you see a signpost and a path with blue markings taking sharply left off the road just before the road turns. Follow the blue markings all the way up to the top, but do not cross over to the other side for Col d’Alsau. Continue along the northern side of the Dentelles till you see another path coming up from the left, directly from Col du Cayron. Do not take this path down, but continue a little bit longer along the top till the blue path takes you up to a Col on the Dentelles near the 563 meter point. You have now walked about 1,5h from the car. 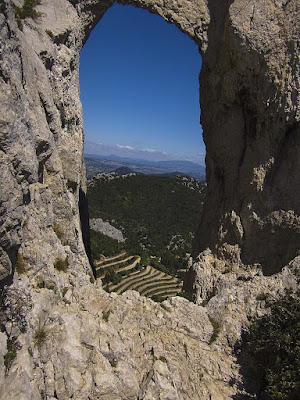 We suggest a stop for lunch up here on the south side (several places to sit), before continuing the walk on the other side of the Dentelles, now following the blue markers westwards. You are now passing some of the more known rocks up in the Dentelles, like Rocher du Turc and Tete Vieille. As you get closer to the latter, you take the blue marked path down to the road near Col d’Alsau (about 30 minutes from the 563 meter point).

Follow the road upwards towards the Col (it’s a Parking here), but you turn right after only some 100 meters; up the stairs that is made here, and follow the blue marked path of Le Gand Montmirail. When you are approaching the Col at the 464 meter point, make sure you have taken the left fork of the blue markers to reach the Col easily (another 30 minutes or so). 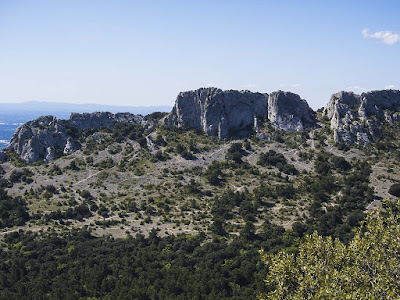 At the 464 meter point (the Col), there is a blue marked path that continues on each side of the mountain. Take the left hand fork and keep following the blue markers (northeasterly direction) till you get right down into the bottom of the Ravin du Vallat de l’Aiguille. Here the path crosses over to the other side of the valley and follows the valley right down to the end.

Towards the end, I suggest you follow the blue marked path straight on up to the road that passes right in front of the big Rochers d’escalade (398 meters), rather than trying to find the path to the left indicated on elderly maps (including my own). 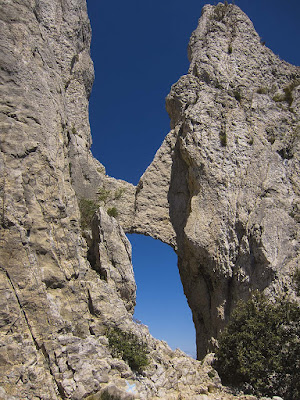 The road that passes here will take you all the way back to the car at Col du Cayron.