This is a rather special walk for people that likes steep hights and airy views (especially the first part of the walk: Mont Gaussier). It involved quite a few ladders and chains for support, but it’s really no problems for average fit persons.

When you drive south from Saint Remy towards Glanum, don’t park at the carpark on the right (for Glanum), but turn left only some 60 meters before that (signs for the hospital) and park opposite the long hospital walls.

Follow the wall up to the top and turn left, and after only another 100 meters, turn right into the fire road marked off this road (DFCI). It is marked with yellow makers and you follow these markers passed the Glanum site (Roman ruines) and further, scattered with boards explaining the botanics of trees and flowers. About 20 minutes from the car, you have an “opening” with a large metal board on display on your right. The heading reads “Sentiere des echelles du Mont Gaussier” and you have a map. You are standing right where the blue footpath starts off, so if anyone in the party don’t fancy ladders and chains or vertiginous passages, they could just continue the forest road they are currently following (yellow markers all the way up) and stop and wait for the others to join them when they reach the tarmac road that goes along the crest on top. 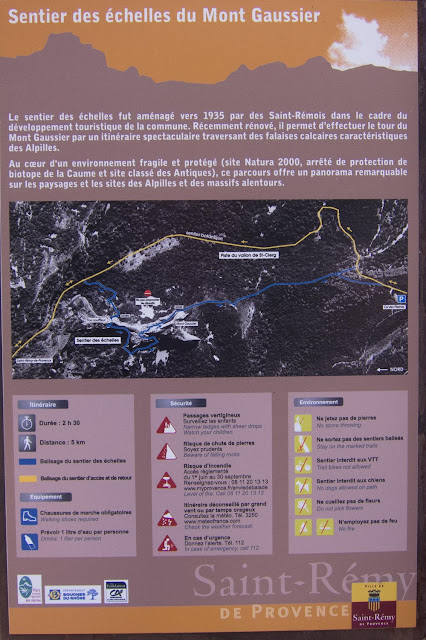 Mont Gaussier has been closed for quite a few years because it became unsafe. I used to use the old path years back, but around 2017-2018 a new shorter version of the path has been constructed equipped with modern ladders and chains. Just follow the marked path all along and when you get close to the top of Mont Gaussier, there is a small path (unmarked) that could take you up and down to a platform just below the summit. Eventually, the blue path takes you back up to the main crest (keep left  in two junctions) and will eventually end up on the tarmac road going along the crest on top, only some 100 meters further west from where the yellow marked road meets the same road.

The direct route up to the point where the yellow path meets the tarmac road takes about 45 minutes from the car. The yellow markers here says “Site Antique de Glanum  2,4km” back to where the yellow forest road came up. It will take longer for the group that passes Mont Gaussier to reach this point, probably another 30 minutes. But it is a nice place to take a brake with good views in most directions. 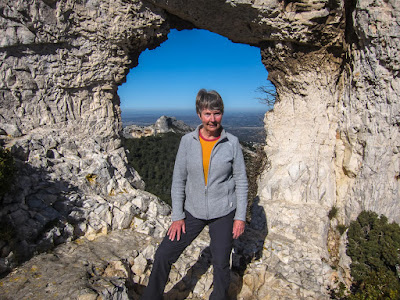 This particular spot is important also because it’s here you leave the yellow markers (at least for a while) to go straight for the “Rocher des Deux Trous” (cliff with two holes). You see the steep footpath starting off from this junction in eastern direction between the yellow forest road coming up from Glanum and the tarmac road going south east. Take this path and you will be over at the site of the 2 holes in about 15 minutes. You can walk all the way out to the holes.

To join the tarmac road again, take the main path going south and you will be joining the road in only about 5 minutes. Here you take left and follow the tarmac road eastwards up towards the big tower. Follow the road uphill, but at the first left turning, I suggest you take the shortcut you see on your right. The small path will take you quicker straight to the point where you face the huge telecommunication tower and you meet up with the tarmac road again (30 minutes after leaving the 2 holes). Just across the road here, you see a white and red painted marker on a large rock. You take this trail across Plateau de la Caume.

When you are getting close to the next antenna (a lot smaller), you could follow the GR route (white & red markers) around the antenna, or simply take the short cut to the right just before you get to the antenna. You will again joint the GR route along the crest on the other side. You will very soon be at the place called “Pas de l’Aigle”, but continue along the crest to the next major “bump” in the ridge about 20 minutes after “Pas de l’Aigle” or about 30 minutes after the last antenna. At the bottom of this “bump”, you see a small footpath taking off to the right down the valley. You want to take this path back down from the crest.

It only takes some 10 minutes to get down to the system of roads and paths that goes along here at the 252 meter point. Here you you start off to the right and just follow through the left turn. Here you take the path taking off to the right just after the turn, going west. You will shortly join another road which you take to the right and then follow around to the left. At the 294 meter point, you could take the short cut going down avoiding a large curve on the road. At the 313 meter point (30 minutes after coming down) you could do the same thing, and take the path that goes down just before the barrier on the road. Just follow the forest road all the way across to the 251 meter point (another 25 minutes). Here you leave the main forest road, but make sure you take the forest road only slightly more to the left, going slightly down. This route should take you back to the tarmac road at the 236 meter point in about 20 minutes.

Take left on the tarmac road and you will be at a big parking in less than 10 minutes. Here you cross straight over the main road (be careful: fast traffic) and continue the GR6 (red & white markers) about 200 meters southwards, but do not take the GR down into the valley. I suggest you walk another 100 meters and take right here instead. This gives you more views and sun shine, and you will soon join up with the GR6 further down. In about 30 minutes from the big parking, you will be at the small lake called “Lac du Peiroou”. Nice place for a break.

The way back to the car via Glanum is about 35 minutes, depending on the possible waiting time for the steep climb up from the lake with the help of a fixed chain. But just follow the GR6 along the right side of the lake and after the climb through the big whole aided by chains, you continue the GR all along to Glanum, where you again follow sign for the Hospital where the car is parked.

For the GPX-file, you could download from here (see just above) or go to this VisoRando link where you also will see the route on a good map.

If you have problems with this VisoRando link, download the GPX-file from above and import it to VisoRando or other application.