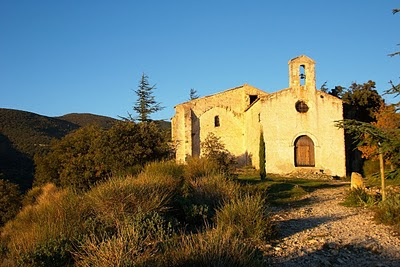 The fields and woods between Cucuron and Vaugines are great for short walks. I tend to take a walk in this area several times a week. The views are grand and there is very little traffic, so it’s a very quiet surrounding. I have suggested 3 different routes south of the main road between Cucuron and Vaugines, and 3 routes north of the road. You can of course combine any of the walks.

This walk only takes 30 minutes each way, and I tend to use either of these routes as short return walks to Cucuron. You pick up GR97 just outside Cucuron and follow it to the 357 meter point, just south of Vaugines. Take the small alleyway up to the church and return to Cucuron along the GR9, which passes on the northern side of the church. Follow GR9 to the signpost at Guet and take the yellow marked trail down to Cucuron.


2. Short to medium walk with plenty of wines, olives and fruit trees.

This walk will only take you slightly longer than walk 1, say another 20 minutes each way. But with a break, this would be a nice 2 hour walk. 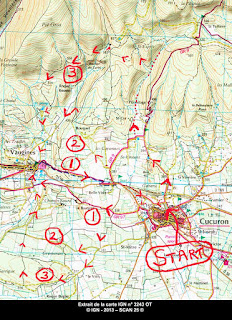 You start again on GR97 from Cucuron, but turn left at the 356 meter point, just ouside the village. Follow the track road all the way down to the 331 meter point, where you turn right. Turn right again after only some 50 meters and simply walk along the lanes all the way to Vaugines, through the 334, 343 and 357 meter points. Continue the same lane up to the church and follow straight on. You pass the 386 meter point and the lane turns into a track road that leads to Roque Rousse. But you turn sharp right (almost 360 degrees turning) up the track road that lead up to the 438 meter point. Here you meet the corner of a large fenced private estate, and you simply follow the track road along the fence back to Cucuron. At the 381 meter point you will meet GR9 and at the Guet signpost, you follow the yellow markers back down to Cucuron.


3. Medium walk into the dense Luberon hills and back through la Garrigue

This walk will take you about 3 hours without stopping, i.e. it’s close to a 4 hour walk with breaks, especially because it can be difficult to find the trail at one point. Start off from the Etang in Cucuron, and take the trail signposted for l’Ermitage and marked with yellow markers. It starts off up the small road to the school. After about 5-600 meters, you meet the GR9 and there is a new signpost. Here you could opt for a longer and sunny start to this walk, by following the GR9 up passed the lovely Chapel de l’Hermitage, and follow the GR9 along the fire road till it meets another fire road coming directly from Cucuron. You simply take left in this junction and follow the fire road up to the 360 degrees turning, marked 627 meters.

On hot and/or windy days, I normally don’t walk up passed the l’Hermitage, but follow the GR9 in the opposite direction, along the paved road for about 200 meters only. On the map, you see a small creek crossing the road at the point where a small trail also crosses the road. You turn right on to this small unmarked trail (and not even marked on the map any longer). You might see some old GR-markings (red and white) because it used to be a GR trail. After a bit, you will notice a large fence going in the direction of the trail on the left side, some 50 meters or so from the trail. This is the fence for a large private estate, and after a while, you will see that the fence turns 90 degrees to the left and climbes up the hill. This is the end of the estate, and very soon, a small trail takes off to the left. Here you start your climb up the hill. After a bit, you pass some ruines of a house (le St-Esprit), but just continue until you meet the large trail (a track road, really), going along the ridge north/south. You take this road north and take a rest at the point marked 582 meters. So far, you have probably walked about 1 hour from Cucuron.

For those of you who opted for the route passed the l’Ermitage and along the fire roads, this is the time to join the rest of us at the point marked 582 meters. Just leave the large fire road in the 360 degrees turn, taking the trail taking down to this point (see map).

From the 582 meter point you follow the track road straight north for 2-300 meters. You want the small path marked on the map, off to the left. It’s easy to find it on the left, just after you have seen a small grotte. It follows around the 560 meter elevation along the dense Luberon hill. It later turns into a small track road, and after passing the 558 meter point you will soon join into a larger track road. Follow this down to the large “round about” at the 416 meter point and further down to Vaugines church.

From Vaugines, you  return along the lane that goes straight south from the main road by the church. Pass the 357 and 343 meter points and continue straight on throught what is known as le Garrigue down to the 316 meter point. Here you turn left along the track road that leads through the Gurrigue lengthwise and you are heading back to Cucuron through the 317 and 331 meter points. Just after the latter, I suggest you turn left up the track road and follow it up till you join the GR97 and follow that back into Cucuron.

Basic information for all 3 walks: